In October of last year, I made a promise.

My burden for the suffering in and around the war-torn country of Syria and its refugee crisis had hit a breaking point.

I promised – “I will not do nothing.” I promised to pray for the refugee crisis in the Middle East daily, and to actively seek ways God can use me and my church to help the people strategically.

Some people love to argue over politics, whether it be governmental or ecclesiastical. I am not one of those people. Not at all. For me to wade into the waters of dialogue and debate over a hotly contested political issue means something. It comes from my conviction that though I am very proud to be a citizen of the United States of America, I am a citizen of another Kingdom first (Philippians 3:20), and I am called to live by the two great commandments (Matthew 22:36-40).

When you take a stand on an issue that is not popular with everyone, you will often be misunderstood, misquoted, mistrusted, and even face meanness. Sometimes we must be willing to endure these things to speak up on behalf of those who face suffering and oppression and cannot speak for themselves.

I have dealt with all of that, but it has been mild compared to the viciousness and even threats that other evangelical leaders and politicians from both parties face. Of course, far worse than any of that is the deep suffering faced by the victims of violence and forced displacement around the world.

During these last 9 months, God has thrown open many new doors to reach out to people from nations in crisis. This includes advocating for refugees around the world, welcoming them into our churches, teaching them English and other skills, partnering with their schools, and engaging with their families on a personal level. I would love to tell you more about all of this, and how you can get involved today at South Tulsa.

Several months ago, someone asked me, “Aren’t there more important issues than this?” Well, since we are talking about the worst humanitarian crisis since WWII and, by the most recent counts, more than 65 million people are misplaced around the world, I can’t think of many. This is a gospel issue. These people are seeking the compassion of Christ and His people. This is a pro-life issue, as every human being is created in God’s image, and God has ordained the gift of life from before conception and beyond death.

I believe the way we respond to this issue and, more importantly, to the people who are victims and suffering injustice, reflects what we truly believe about the Gospel and the Great Commission. If your heart is moved, please read on below. I have lots to share about the information gained, lessons learned, and change that was affected during our time in Washington DC on World Refugee Day this week.

There are also several links below to take you as far as you may be willing to go.

World Refugee Day was one of the busiest days of my life. A handful of pastors and denominational leaders, including several from the SBC, were invited to our nation’s capital, and we were shuffled from place to place and from meeting to meeting with some very incredible people compliments of our partnership with World Relief.

It is hard to navigate the facts and realities of this issue in our current political, rhetorical, and media climate. Taking these meetings was the best way I knew to have real dialogue and gain real information.

Because World Relief is a conservative evangelical organization, and because of the seemingly partisan nature of this topic, the vast majority of our meetings were with Republican elected officials and/or their staff, including many from our own home states. I was blessed to spend several hours with my friend Congressman Jim Bridenstine, who is member of my church, along with Senator James Lankford, Congressman Steve Russell, and also meetings with various staff in the offices of Speaker Paul Ryan, and Senators Jim Inhofe and Marco Rubio. We also had mutually informative discussions at the State Department, and at the White House with the National Security Council and Ivanka Trump’s team. 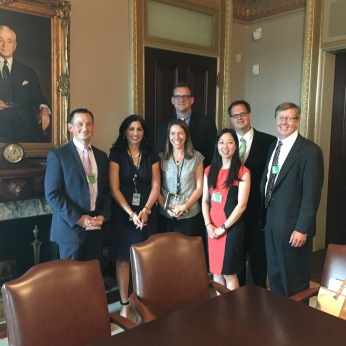 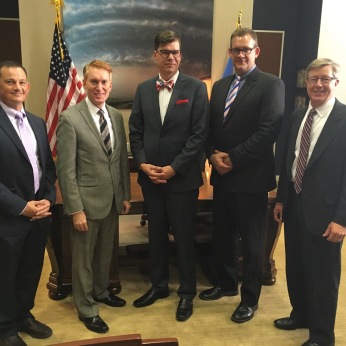 I have no doubt we honored God and the millions of people who are personally affected by the refugee crisis worldwide. All of them are people who have been created in the image of God. There are countless questions that have yet to be answered, problems yet to be solved, and work still to be done. At the same time, I believe significant progress was made. We left each meeting with a unified call to pray for war-torn countries worldwide and their refugees. We affirmed a shared commitment to both fight and eradicate terrorism worldwide. In every meeting, without fail, we were able to come to a unanimous decision that it is possible to be committed to compassion and justice for refugees, while also maintaining a strong commitment to national security.

This has been called the worst humanitarian crisis since World War II. The good news is that last year, more than 550,000 refugees returned home to try and rebuild their lives (UNHRC). Unfortunately, the number of displaced people around the world jumped over 67 million.

There are women, men, and children from all over the world – including the majority-Muslim nations – who are asking the Church for help. They have heard of Jesus’ and His followers’ reputation for compassion, kindness, care, and generosity. Many of them are being ignored or even targeted by their own people. Even some Muslim imams have asked their local Christian congregations for assistance. What should our response be?

One of the most powerful statements I heard in DC was this: “We should not punish the victims of ISIS for the sins of ISIS.”

“We should not punish the victims of ISIS for the sins of ISIS.”

After our long day in DC, I believe more than ever it is possible to be pro-refugee and pro-national security. There are clearly many reasons to be concerned about safety and it is of great importance that we learn as much about a person before accepting them on our soil. At the same time, there is a lot of misunderstanding going on.

The number one misunderstanding…

…I encounter on a regular basis is the difference between an immigrant and a refugee. Immigrants seek permanent residency in a nation other than the one in which they were born. Refugees seek temporary residency in order to escape dangerous situations in their home country, whether natural or human-caused.

Refugees do not consider their country of refuge to be home. Home is permanent, not temporary. Spend time with any of the dozens of refugees we work with on a weekly basis, and you will hear them all talk about their desire and plans to return home.

My goal with the information below is to help us correct some of these misunderstandings. Even more than that, however, my goal is to continue to encourage all of us to open our hearts and perhaps even allow God to help us change some of the narratives according to which we think, feel, and act.

I believe without equivocation we can stand with refugees and still support and cooperate with our lawmakers and law enforcers. I believe there is a common ground. I am confident I neither know nor understand all the facts, which is why I do my best to remain teachable.

I am proud to be an American, but I am a citizen of another Kingdom first (Philippians 3:20); and God has called the citizens of His Kingdom to stand with those who are vulnerable and to share the Good News of Jesus with women, men, and children from every tribe, tongue, and nation on the earth.

As a husband and father, I care deeply about the security of my family. As an American, I care deeply about the safety of my neighbors. As a pastor, I am called to teach and live the two great commandments of Christ. As a child of God, I believe that every human life is of equal value, and that every person from every ethnicity, both unborn and born, both male and female, are created in the image of God. As a follower of Jesus, I am bound to the Great Commission.

I hope this information will be helpful to you. I can assure you it is worth your time.

[The information given here is combined from a variety of sources compiled by Jenny Yang of World Relief, myself, and other sources such as the Refugee Processing Center, the Pew Research Center, the CATO Institute, the Migration Policy Institute, the UNHRC, and a book I highly recommend – Seeking Refuge.]

–THOUGHTS ON THE BIBLE, IMMIGRANTS, AND REFUGEES

–The most recent UNHCR report on displacement and refugees around the world. EXCELLENT data.

–Syrian Children are Not Politics – in this 2016 post I pledged that I would not do NOTHING regarding the refugee crisis. My heart was burdened and it has only gotten stronger. The article includes some thoughts on the unrealistic fear of refugees based on the numbers.