In church this past Sunday, we sang my favorite hymn: Ein feste Burg ist unser Gott by Martin Luther (1483-1546). In the English-speaking world, the hymn is better known as A Mighty Fortress is Our God. This song is often called the “the battle hymn” of the Reformation as it has been important to Lutherans and other Protestants who, for the last 500 years, have been shaped by a European legacy. Since Luther wrote the hymn, its The tune and words have been used by some of the most important composers and churches in the world, arguably the most famous being the composition of Johann Sebastian Bach (1727). Less notably, the tune was the doorbell chime at the home of Ned Flanders on the Simpsons :).

I love this hymn for several reasons, especially its origin which I describe below. It is also special to me because, on a particular Sunday in church, I believe God used the song to let me know He was thinking of me. Just days before that service, I had read some great details about this song and Luther’s stint at the Wartburg castle. I thought to myself, “I can’t wait for the next time we sing this song because it will have a brand new significance of worship for me. It’s been so long since I’ve heard it in any church, I wonder when that time will be!”

Wouldn’t you know just days later, we sang it. When I recounted my story to our worship leader, he remarked, “We haven’t used that song in years. For some reason this week God just brought it to my mind.” It may sound trivial, but I felt special. I love it when God reminds me that I am in His thoughts – even concerning the small things. 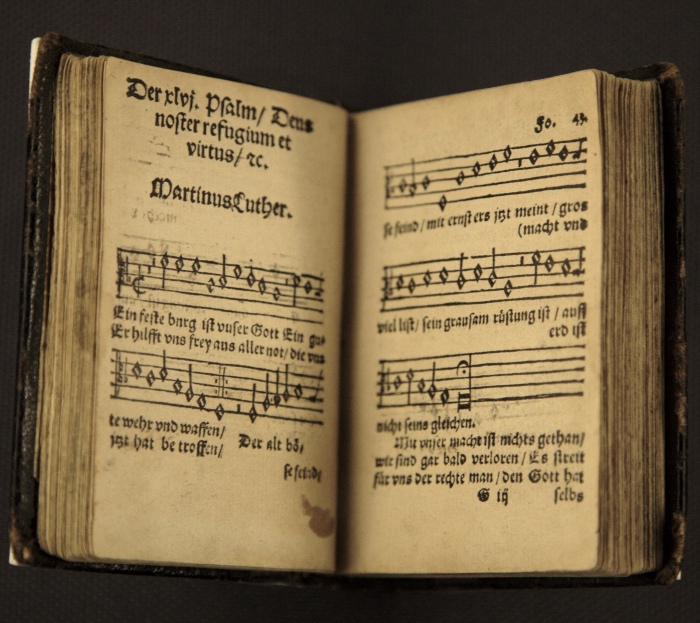 Luther did not write A Mighty Fortress for a solo performance. No, this song was meant to be performed by an ensemble or choir. It was meant to be the cry of a community of faith, not just one person. Ironically, however, its composition likely took place when Luther was confined in virtual solitude.

Luther wrote this song in his own fortress, trusting in God’s protection.

There have been several suggestions regarding the origin of this hymn. Until I am convinced otherwise, this is the one I choose to believe.

As the seeds of the Reformation began to grow, Luther found himself at odds with the existing Church authorities (SEE BELOW FOR MORE DETAILS ABOUT MARTIN LUTHER). Luther refused to renounce his beliefs under threat of severe punishment and consequently his writings were banned and he was declared an outlaw. As the authorities sought his life, Luther’s friend Prince Frederick hid him at Wartburg Castle, where Luther wrote several important literary works and musical pieces. It was here that he also began working on his German translation of the Bible. Eventually, because of Luther, the common German men and women would be able to read God’s Word on their own. It was also likely in Wartburg Castle, which had become a “fortress” of sorts for Luther, that he wrote the hymn A Mighty Fortress is Our God. It would seem that Luther’s faith in the castle walls paled in comparison to his trust in the fortress that was His God.

The words to A Mighty Fortress are below. Read them carefully and consider the context discussed here. Perhaps this song will become one of your favorites as well. May it be a reminder that our trust is not in ourselves or the walls we build with our own hands. Our faith is grounded in the God who created everything, and He must win the battle! The body they may kill. God’s truth abideth still. His kingdom is forever!

Remember, Luther wrote this not for a soloist, but for singing in community as a corporate confession of faith.

A mighty fortress is our God,
A bulwark never failing;
Our helper He, amid the flood
Of mortal ills prevailing.
For still our ancient foe
Doth seek to work us woe;
His craft and pow’r are great,
And, armed with cruel hate,
On earth is not his equal.

Did we in our own strength confide,
Our striving would be losing;
Were not the right Man on our side,
The Man of God’s own choosing.
Dost ask who that may be?
Christ Jesus, it is He;
Lord Sabaoth, His name,
From age to age the same,
And He must win the battle.

And tho’ this world, with devils filled,
Should threaten to undo us,
We will not fear, for God hath willed
His truth to triumph thro’ us.
The Prince of Darkness grim—
We tremble not for him;
His rage we can endure,
For lo, his doom is sure,
One little word shall fell him.

That word above all earthly pow’rs,
No thanks to them, abideth;
The Spirit and the gifts are ours
Thro’ Him who with us sideth.
Let goods and kindred go,
This mortal life also;
The body they may kill:
God’s truth abideth still,
His kingdom is forever.

Click here for a compilation of various versions of the tune – this may be the best 15 minutes of your day! (or here -> http://www.youtube.com/watch?v=JvjX2ZTADgs&feature=fvst)

Martin Luther (1483-1546) was born into a strict Roman Catholic family in Eisleben. His parents were able to provide the means for an excellent education for Luther who, by young adulthood, had become proficient in Latin, Greek philosophy ( specifically Aristotle), medieval philosophy (specifically William of Ockham), and law.

At the age of 21, Luther had a life-changing experience that literally came from the skies. During a violent thunderstorm, he was nearly struck by a bolt of lightning that hit the ground next to him. Luther would later recount this as a near-death experience, during which he cried out, “Help me, St. Anne! I will become a monk!” And become a monk he did, forsaking his career and possessions for a life of poverty among Augustinian hermits for the next several years. Having been ordained as a priest during this time in 1507, Luther had become proficient in the meditation, study, and teaching of the Scriptures. In 1512, he became a professor of Bible at the University of Wittenburg. His most important writing and teaching on the Scriptures were produced from this position which included commentaries on Psalms, Romans, Galatians, and Hebrews.

As a monk, priest, professor, and preacher, Luther had become as familiar with theology and the workings of the Church as one could be; and what he saw among his fellow clergy disturbed him. Luther had several complaints concerning the Church, the Pope, and the priesthood. None, however, were as important to him as the issue of “indulgences“. In short, indulgences were pieces of paper that a person could buy from church leaders that would release them, their loved ones, and even their deceased relatives from sin. It is possible that indulgences were purchased by some in advance of committing a particular sin, as a form of “license” to sin. The famous phrase used by the Church concerning indulgences went like this: “As soon as the coin into the coffer rings, a soul from purgatory springs.” For Luther, this system was both unbiblical and replete with corruption.

In 1517, the Lutheran flood broke loose. Luther had composed his 95 Theses, a list of arguments against what he believed to be heretical teaching and practice within the Roman Catholic Church. Above anything else, Luther wanted the German Church to be fully biblical and fully German at the same time. Legend holds that Luther nailed his theses on the door of the most prominent Roman Catholic church in Wittenburg, the castle church. On October 31st of 1517, the date we now celebrate as “Reformation Day,” the 95 Theses were published and the Protestant Reformation was launched.

Over the next few years, the theses and some of Luther’s other important works sparked fierce debate in the Church. His first major conflict came with Pope Leo X, who published two “bulls” condemning Luther’s teachings and excommunicating him from the church. Luther responded in kind, by publicly burning the papal bull and the papal book of church law.

In 1521, the Holy Roman Emperor Charles V called for the Diet of Worms (pronounced Deet of Vorms), which was an assembly to debate Luther’s teachings and membership in the Church. This was not a debate, however. It was in fact a trial and Luther was given an ultimatum – to recant his views or be condemned as a heretic – which meant being kicked out the church, risking the losing of his salvation, and potentially being put to death. Luther’s famous reply has seeped into the annals of the ages:

“Unless I am convinced of error by the testimony of Scripture or (since I put no trust in the unsupported authority of Pope or councils, since it is plain that they have often erred and often contradicted themselves) by manifest reasoning, I stand convinced by the Scriptures to which I have appealed, and my conscience is taken captive by God’s word, I cannot and will not recant anything, for to act against our conscience is neither safe for us, nor open to us. Here I stand. I can do no other. God help me.

After his refusal, Luther was taken prisoner for a time and his writings were officially banned by the Church. It was during this period, 1521-1522, that Luther was held up in the castle at Wartburg. While there he would write letters to his friends such as Melanchton that were addressed from “the wilderness” and “Patmos”. Along with several important writings and hymns like A Mighty Fortress is Our God, Luther made perhaps his most important contribution to the German Christianity of his day – the beginning of his translation of Scripture into the common German tongue – which would become known as “the Luther Bible – the people’s Bible.” It was not the first German translation of Scripture, but it had no equal.

For the next two decades, Luther would continue to fight to establish what he believed to be clear biblical teaching that would characterize Lutherans and Protestants. He was involved in several disputes with his enemies and his friends. In 1525, he married Katherine von Bora, a nun he had helped escape from a convent with several others. They eventually had six children together, two of whom died very young. Luther called her “My Lord Katie.” “Katie” was a sharp and witty woman who was very important to Luther and Protestants in this period. (My next post will be all about her!)

The last several years of his life were spent dealing with conflict, heartache, and sickness. Things would come full circle for Luther who died of heart failure on February 18, 1546, on a diplomatic trip to Eisleben, the town of his birth.

THE TEXT OF PSALM 46

Most people consider Luther’s writings on the book of Romans to be his most important. Romans 1:17 would become one of the most important verses of Protestantism, in large part because of Luther. The verse reads: “For in it the righteousness of God is revealed from faith for faith, as it is written, “The righteous shall live by faith.” (ESV). The book of Romans was not the only impetus for Luther’s boldness as a reformer. He also made a habit of studying and meditating on the Psalms, especially in times of strife. A Mighty Fortress is clearly connected to Luther’s understanding of Psalm 46 (TEXT BELOW).