[This is part three of my series of articles entitled: “Hangin’ with the Carolingians.” The Carolingian dynasty, which encompassed nearly two centuries (AD 686-840), is a fascinating era. The Venerable Bede, who is the subject of this article, was an English contemporary of the Carolingians who was largely responsible for the rise of English literacy before and during the Carolingian Renaissance.]

Tomorrow is the first day of Lent. For the 40 days that follow, millions of people around the world will be reflecting on the events leading up to Jesus’ crucifixion and resurrection while participating in a partial fast from some food or activity. The 40 days of abstaining from something that one enjoys are meant to be reminiscent of Jesus’ fast during his sojourn into the desert to be tempted by Satan. To be sure, most of the people who observe Lent come from the Catholic faith. Some Protestants like me, however, believe the Lenten season has its roots in good biblical theology. Why not observe the season? Rather than celebrating the resurrection for one Sunday, or even for a week, Lent gives us five Sundays during the course of 40 days to reflect on the Living Christ.

Lent, which comes from an old English word meaning “lengthen,” begins as the days get longer during the transition from winter to spring. Lent begins on the seventh Wednesday before Easter Sunday which has come to be known as Ash Wednesday. Many churches still hold Ash Wednesday services, during which ashes are placed as a mark on one’s forehead, usually in the shape of the cross.

Today, though, is “Fat Tuesday.” It is often used as a day for those who will observe Lent to have one last binge before the fast begins. But overindulgence is not the only marker of the day before Lent. The real purpose of the Tuesday before Lent is described by its more spiritual name – Shrove Tuesday. The word shrove is the past tense of shrive, which means “to hear someone’s confession.” Thus, Shrove Tuesday is a day for believers to practice confession and to ask the Lord to prepare their hearts for the upcoming 40 days of voluntary abstention. As with any fast, the purpose is not simply to give something up in order to suffer for suffering’s sake. The purpose is to use the time and effort we put into one thing as time to reflect on the Lord Jesus and His activity in our lives. The pain is useful in that it constantly reminds us of our need to submit to Him. 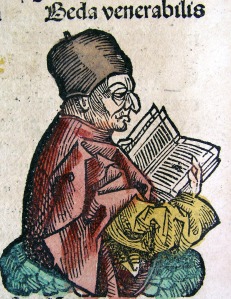 By most accounts, the most influential Englishman to have lived during the Middle Ages was Bede (AD 673-735). It would be hard to argue otherwise, as Bede has been called “The Father of English History.” In a ninth century compilation of homilies by Paul the Deacon, Bede was given the title “Venerable” on account of his piety and because he was one of the most beloved priests in the history of the Church.

Bede was educated in the monastery at Jarrow (northeastern England) from a very young age. Bede was passionate about three things above anything else: Christ, books, and the English language. He became a pioneer of sorts in the scholastic monasticism that was solidified in Europe during the Carolingian Renaissance. Bede, following in the footsteps of his predecessors at Jarrow, helped to develop one of the first substantial monastic libraries in Europe which aimed to preserve important Christian and classical texts.

But Bede was not satisfied with just collecting. As Benedicta Ward has commented, “Bede not only had books, but he read them as well, and he did his utmost to share what they contained.” Bede taught and wrote for the benefit of new believers, to train them up in righteousness, and perhaps most importantly to make the Scriptures available to people in their own language.

Until Bede came along, the English people were primarily limited to studying God’s Word in Latin. If a person could not read Latin, he or she was forced to hear only the reading and interpretation of others. Bede began translating and composing literature into English.  He was a master of finding Christ in the Hebrew Scriptures and applying the Old Testament to the medieval Christian lifestyle. He made the New Testament tangible to those who wanted to understand its teaching in English. And, in 731, he completed his magnum opus, Ecclesiastical History of the English People. Ironically, Bede composed this work in Latin so that it would be more influential to the broader academic and religious community of Europe. To this day, nearly all historians of the Anglo-Saxon people utilize Bede as a primary source.

The fact that Bede most often trained new believers makes his teaching on Lent helpful on a very basic level. In the passage that follows, Bede instructs believers participating in Lent to be prepared for distractions and temptations from the Enemy. He begins by warning that Satan might use our own attempts to use pious language as a barrier to effective prayer. Perhaps this selection from one of the Church’s greatest leaders will be of help to those of you willing to take on this venerable endeavor during the next 40 days.

Persistence in praying only deserves to be fruitful if what we pray with our mouth we also meditate on in our mind, and if the cry of our lips is not split off in another direction from our thoughts. For there are those who, when they enter the church, prolong their psalmody or pray with many words but because the attention of their heart is directed elsewhere, they do not reflect upon what they are saying. They are indeed praying with their mouth, but they are depriving their mind of every fruit of prayer because it is wandering outside; they think that their prayer will be heard by God, although those who utter it are not listening to it themselves. There is no one who cannot perceive that this is taking place at the instigation of the ancient enemy [Satan]. For knowing the usefulness of praying and begrudging human beings the grace of obtaining what they request, he sends various trivial thoughts into those who are praying, and sometimes even phantasms of shameful and noxious things with which he impedes their prayer, to such a degree that sometimes while we are prostrating ourselves in prayer we have to endure so many waves of thoughts of so many kinds running this way and that, such as we have not known ourselves to endure while lying flat on our backs in bed. For this reason it is necessary, dearly beloved brothers, that we take care to overcome the malice of the devil when we perceive [his] presence, by clearing our mind, as far as we are able, of the mists of every sort, which the enemy delights in scattering, and by summoning the perpetual protection of the kind Defender who is able to grant to those who are beseeching, however unworthy they may be, the grace both of praying purely and of obtaining what they request.

Now the purity of prayer is of great benefit if at every place or time we abstain from illicit actions, if we always restrain our sense of hearing as well as our tongue from idle conversations, if we accustom ourselves to walk in the law of the Lord and to search out his testimonies with our whole heart (Psalm 119:1-2).

MORE ABOUT THE VENERABLE BEDE

There are very few sources which recount the details of Bede’s life; especially his early life.  What is know comes primarily from two sources: Bede’s own work entitled Lives of the Abbots, and Cuthbert of Jarrow’s Death of Bede. Bede was born in AD 673 in the kingdom of Northumbria in northeast England. When he was seven years old, his parents presented him to the abbot of the local monastery, Benedict Biscop, for the purpose of education and monastic training. Bede eventually moved to Jarrow and continued his training with Biscop and later the abbot Ceolfrith.

Bede was ordained a deacon at the age of nineteen and a bishop at the age of thirty. His passion was not so much for the monastic orders but rather study, writing, and teaching. He became well-versed in the Scriptures as handed down by the Roman Catholic Church. Since Latin was not his native language, however, he grew increasingly dissatisfied with the Roman Catholic texts and their relevance to English-speaking peoples. The monastery at Jarrow had also become a home to many other forms of European culture and literature. Under the influence of Biscop, Ceolfrith, and Bede, a renaissance of sorts had begun among the English people long before the Carolingian Renaissance.

Bede translated several books of the Bible, wrote important works of his own, and preached many sermons that have been recorded to history. None of his compositions are more treasured than Ecclesiastical History of the English People. This book, easily accessible to the modern reader from many sources, recounts the story of Bede’s people – the Anglo-Saxons – and their migration to the British lands followed by their conversion to Christianity. An free translation of Ecclesiastical History can be viewed online here: http://www.ccel.org/ccel/bede/history.

During the Easter season of 735, Bede became ill and was often short of breath. According to Cuthbert, Bede spent the last weeks of his life reciting psalms, liturgies, and poetry. He also spent time teaching his students and translating the Gospel of John into English. In his final hours, Bede gave gifts to his fellow priests and students and said his final goodbyes. As he sat in the chamber where he had spent so much of his monastic life, “Bede asked to be turned so that as he sat on the floor of his cell he might be facing the place where he used to pray. Singing, ‘Glory be to the Father and to the Son and to the Holy Spirit,’ and with his head cradled in [a young scribe’s] arm, he breathed his last.” (Ward)